As the site of CO2 fixation in terrestrial plants, the mesophyll tissue inside leaves is one of the most important tissues on Earth. Despite its importance to plant function, the mesophyll has been notoriously difficult to study because of its three-dimensional structure, wide interspecific diversity, and its location inside leaves.

Building off our prior work showing the importance of genome size-cell size allometry on leaf surface conductance (Simonin and Roddy 2018; Roddy et al. 2020), we have shown that genome size is a strong predictor of all cell sizes and packing densities throughout the leaf (Théroux-Rancourt et al. 2021). Comparing measurements of mesophyll 3D anatomy to models of diffusive conductances has shown how leaves optimize diffusion through the intercellular airspace and into the liquid-phase of the mesophyll cells. In contrast to the common idea that increasing mesophyll porosity is important to mesophyll conductance, our work shows instead that increasing the surface area of mesophyll cells exposed to the intercellular airspace is actually more important–and increasing this exposed surface area is accopmlished primarily by reducing cell size, not by manipulating porosity (Théroux-Rancourt et al. 2021).

In addition to enabling CO2 diffusion for photosynthesis, the mesophyll also performs a biomechanical role. So how does the leaf build an efficient mesophyll tissue that maximizes CO2 diffusion while remaining mechanically stable? With support from NSF, we have shown that across a wide diversity of species, the leaf spongy mesophyll has a common structural motif: it conforms to a two-dimensional honeycomb in the paradermal plane (Borsuk et al. 2022). Honeycombs are efficient ways of building mechanically robust structures that allow for substantial variation in their constituent cells. For example, while an ideal honeycomb can be composed of identical, three-lobed cells, honeycomb-like tissues can be composed of cells with variable numbers of lobes. Indeed, real lives show such variation.

Building mechanically robust structures that allow for variation in their constituent parts can be a real change in biological systems. One way of building in such robustness without needing too much information is to rely on physical self assembly processes. With support from NSF, we have developed the first model of mesophyll development, which recapitulates the porous network structure of the honeycomb phenotype in two dimensions (Treado et al.). Unlike most other tissues whose cells remain confluent, the mesophyll is unique because its cells begin development fully confluent and must partially separate to allow for intercellular airspace formation. Thus, the tissue must become more porous at the same time as the cells are expanding due to intracellular turgor pressure.

This model is particularly powerful because it relies on only a few parameters and reveals a few key features of mesophyll development: cell wall growth must be localized to regions on the cell exposed to air space, cells must be both adhesive and also separate from each other, and the entire tissue must be under pressure. This final feature was a bit surprising: we found that the tissue cannot be under negative pressure (i.e. pulled apart by the expanding epidermis) but instead must be under positive pressure imposed (presumably) by the epidermis. So epidermal expansion must be coordinated with mesophyll expansion.

While honeycombs can be informationally efficient structures that are robust to variation, most angiosperm leaves don’t display this phenotype. The honeycomb phenotype appears only among species with large cells (and large genomes). But among species with small genomes and small cells, the leaf spongy mesophyll exhibits no obivous structural order.

This seemingly unstructured leaf spongy mesophyll is also reflected in the mesophyll of flower petals. Comparing structural features of the flower and leaf mesophyll is particularly powerful because the two tissues are homologous and develop from the same apical meristem, but they perform different functions–thus we can examine how different selective regimes influence the development, structure, and evolution of the mesophyll. While the flower mesophyll primarily performs a biomechanical role, selection has likely favored it to be cheap and porous, which is reflected in the phylogenetic patterns of mesophyll structure.

Our ongoing work on the mesophyll is currently extending our developmental model into three dimensions and developing quantitative metrics to describe the structure of the non-honeycomb mesophyll that is so abundant among species. This work is currently supported by the US National Science Foundation.

Théroux-Rancourt 2021. Maximum CO2 diffusion inside leaves is limited by the scaling of cell size and genome size Proceedings of the Royal Society B 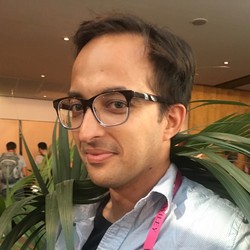 My research interests include plant structure, function, and evolution, with an emphasis on the biophysical factors, developmental innovations, and agents of selection that influence phenotypes.